Ok so I’ve been a little lazy about updating recently. (Are you really surprised?) So I thought that I would write a summary post, about all the things that I should have posted about but haven’t.

Last week after some unsuccessful attempts on H:Baleroc we’ve change things up a little and this week we beat his toes into the ground with rocks and pointed sticks. [That’s what he gets for being so tall that we can’t reach anything else.]

Congrats Team:Sinwell and to the following:

Also of note is that the other rosters are Myzt Moore 7/7N and Mastoj 6/7N. Great job all!

Tonight on our first attempts Elder Tribunal did vanquish the Heroic Majordomo Staghelm 10.

(pics later if I remember)

On this night Elder Tribunal did finally down Heroic Shannox 10.

Statreos wrote: “After a second week of looking at Ragnaros, Elder Tribunal has defeated the firelord! Congratulations to Beastmaster, Grinamdord and Statreos on their phat loot, and congratulations to all on a job well done. Unfortunately, they were so eager to get their gear enchanted, only a few of us remained for a screenshot in the firelord’s vacant chamber!”

Congrats ET on finally hitting [7/7]! Next week we start on Heroic!

As a side note we have adopted EPGP as our loot system. (We actually started using it a while ago and tracking in a spreadsheet, but have since moved it into the Officer Notes and are now using the mod.

Yet another double dose of boss kills! After gearing up some new tanks (because the Sinwell roster lost 2/3 of the tanking team), and with the Firelands nerf we’re back in the game. Congratulations ET on becoming [6/7]!

[pics if I remember to crop em later]

You wanted a double dose of boss kills? Well you got it! Tonight ET felled Beth’tiliac and Lord Rhyolith! This moves us to 18th on server (10th horde side), and puts us back on the front page. Congratulations ET on becoming [4/7]. 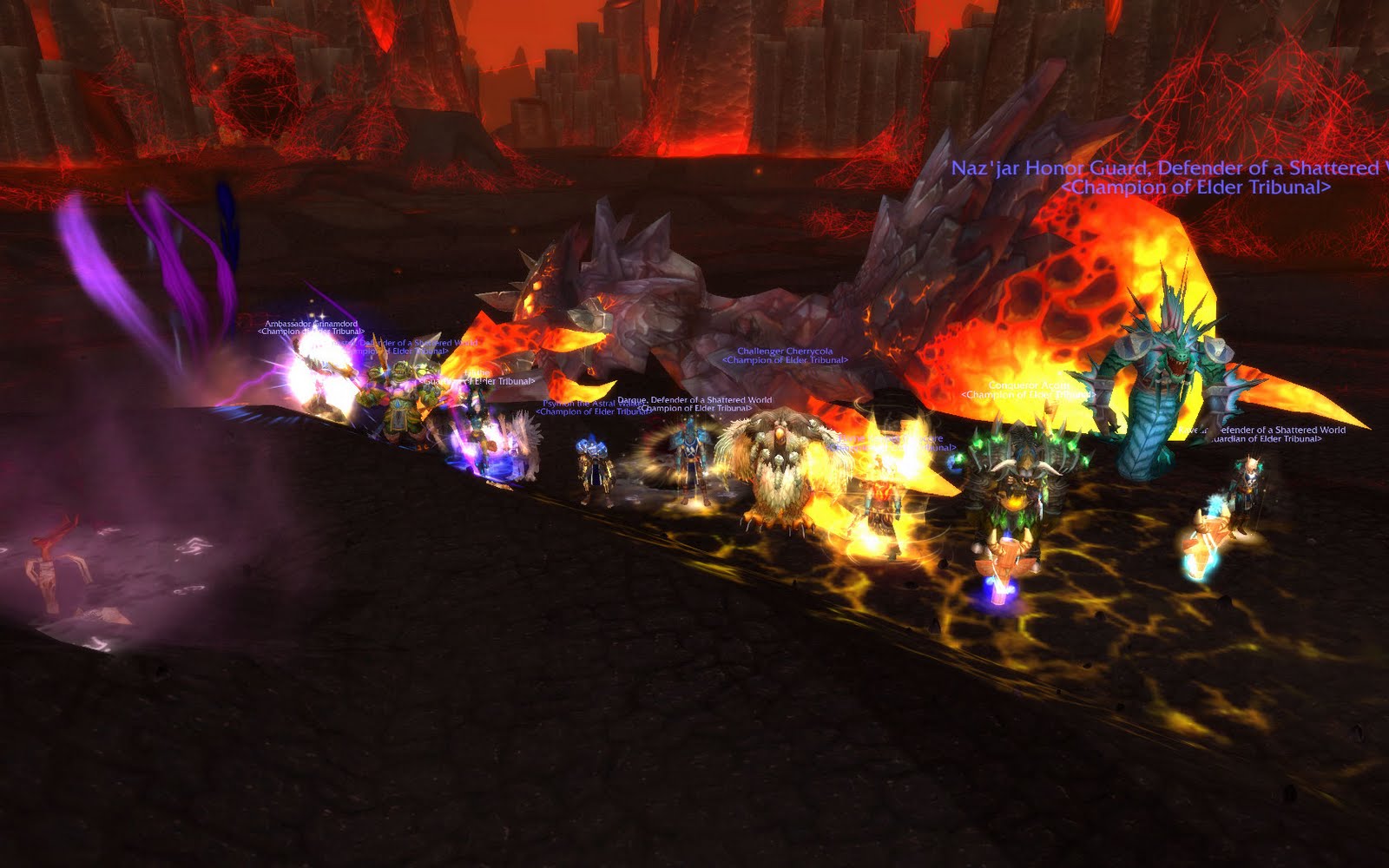 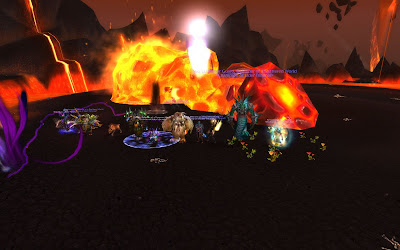 Mere hours after our first kill, we got our second FL kill. It was Baleroc the annoy the healers. We of course forgot to take a picture. Congratulations ET on becoming [2/7]. This killed moved us to the front page of wowprogress for our server, and was the 10th server kill of Baleroc.

With 4.2 and Firelands out, its that time to work on new bosses and post about it when they die. In true (belated) fashion, ET’s first FL kill was Shannox the dog lover. We of course forgot to take a picture, so here is a picture of our second kill instead! Congratulations ET on becoming [1/7]. 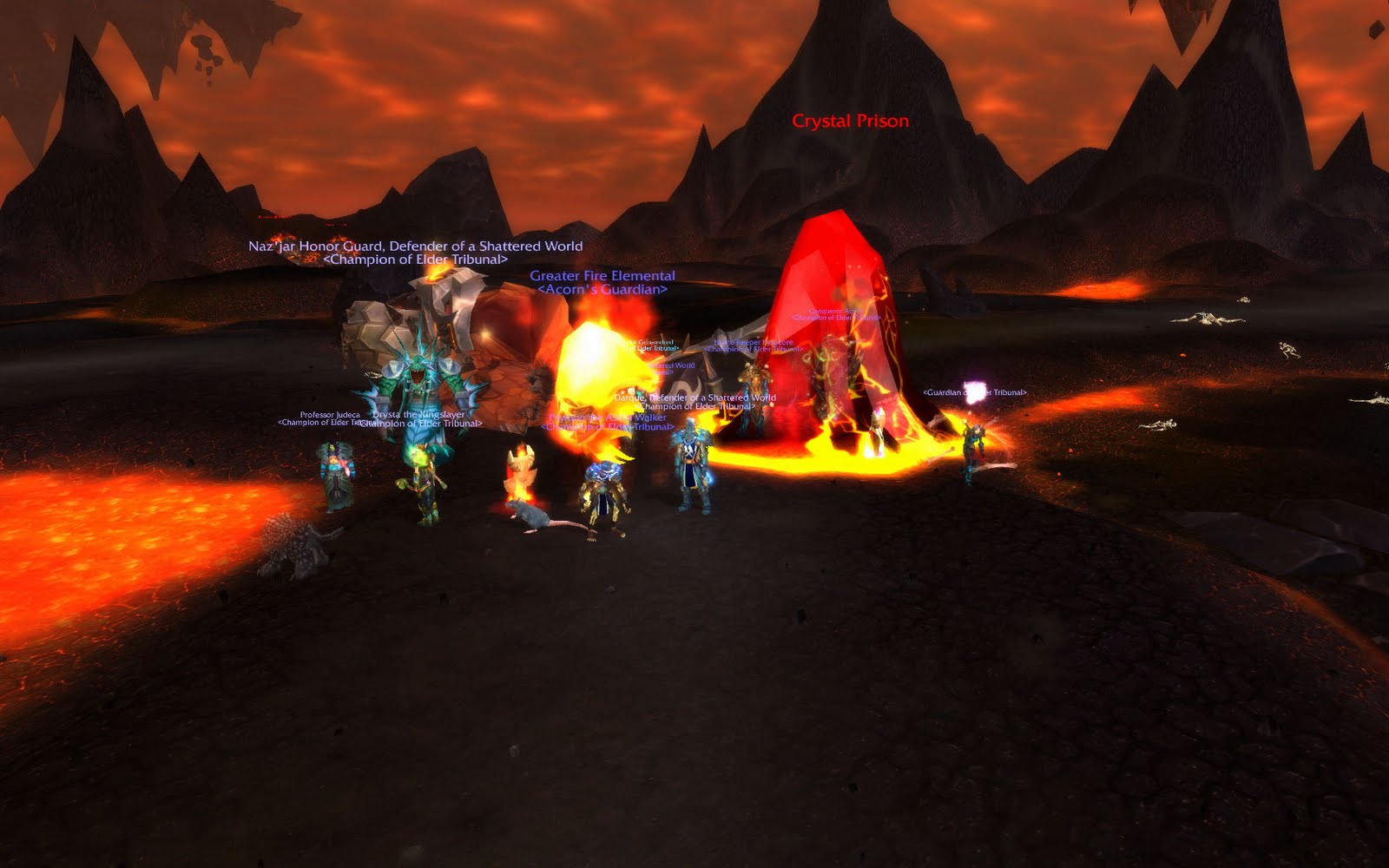 So since the launch of WOW:Cataclysm Elder Tribunal’s raiding focus has been on 10man. We had sign ups on the the forums to allow people to post their interest in raiding, their commitment, and their preferred format (more hardcore, more social). Quite a few people quickly disappeared, or simply didn’t post and chose to remain Friends and Family (F&F) aka Social players in ET. As a result of that thread the Officers created a couple 10m rosters. Before the rosters were posted there were about 13 or so people that had already started working on the new raid content.

We attempted to make well balanced groups (on paper at least) and split some of the perceived skill levels and experience between the groups. We also tried to make sure that both groups had a good coverage on raid buffs, classes, etc.

Traditionally, we have had problems in the past with people believing that there is or was a Team A and a Team B. I still personally believe that we have done a lot to minimize this perception with good balancing, planning, hard work. With 10man and 25man sharing the same loot and the decision to switch our focus from 25man to 10man raiding this was no exception. ET has had a long history (over 10 years!) of being a guild and as such we have a history we can pull from. We decided to name our teams using the name of retired Officers. Most of which come from the EverQuest chapter of our history.

As a guild, we have a tendency to not cater much to alts. We focus on gearing peoples Main characters, and if they want to PUG or form Alt Raids they are more then welcome to do so, but on their own time [and not during regularly schedule raid time]. Due to this focus we attempt to maintain rosters with a minimum amount of people to ensure that most of the time if 77% of the roster shows up, that a raid should be viable and happen. As a quick explanation we keep roster size at about 13 people, and try to make sure that roles counts include 3 tanks, 4 heals, 6 dps. Most of the players in Team: Sinwell at least maintain two sets of gear and two roles. Team: Sinwell’s average raid attendance for the top 10 rostered members hovers close to 100%. To me this is, of course, the ideal. [Ten people that work together twice a week is a much more cohesive unit then 15+ people who work together 1x a week, and never have the same raid composition.]

Anyway I think that I have gone on a tangent from my original purpose of writing this. That is to hopefully expand on what we have done, where we are heading, and what we hope to accomplish.

One of the concerns of shifting from a 25man to a 10man raid focus was that the guild would lose he unity and family feel that we have encourage and maintained for a long long time. Sundays have been old school achievement night, with targets ranging from vanilla to BC to wotlk. Also To attempt to address that we decided that at least once a month we would have a 25man raid night. So far we have actually managed to do two 25m nights. We put in 5 attempts on a boss and then break up into our normal 10man roster. Sadly we skipped last month (I’m not real sure why). So every last Tuesday of the month we gear up for 25man raid night.

This past Tuesday (yes 4.1 patch day) we downed BH25:Argaloth, and then moved to BWD25:Magmaw. Where for the second time we attempted him in the 25man format, and did slay the foul worm. 🙂