Since I released my old article on how to add a client side open ticket list I've been meaning to rewrite the mod. The article that your reading now an updated and re-written version for 1.10 and 1.10.1 releases.

One of the features that I would love to see integrated into osTicket is an open ticket listing for clients. While I would like to see this added to code it would really need some more coding to make it viable as a PR. Being able to make this a plugin would be great, but I dont think that this is viable with out editing core files at this time.

I feel that this simple mod gives users the ability to see what tickets are already open. This should cut down on duplicate tickets, and give the user a better idea of how many tickets are ahead of them when placing a request. This mod was originally written for osTicket 1.6ST and re-released for 1.7, 1.8, 1.9 and 1.10. This rewritten version utilizes the osTicket db access functions.  While this mod is here for everyone to be able to use, it would be great if the people who use it donated .

In the past I have included two ways to install (the mod). However with this release I am only including one way to install this (chiefly due to the fact that no one has ever donated a dime for this mod). 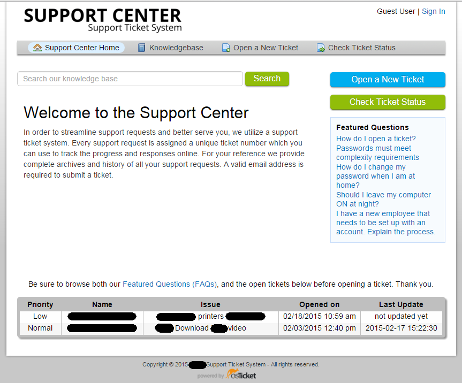 1. Save the display_open_topics.php into your base osTicket folder. Open it and edit the lines 18 through 24 to match your setup.

2. open osticketDirectory\assets\default\css\theme.css with your favorite text editor and scroll all the way to the bottom and add the following:

The file archive for this mod can be downloaded here.

Running 1.9? Please see this article instead for that version: Add a client side open ticket list to osTicket 1.9 or 1.10rc2

Running 1.8? Please see this article instead for that version: Add a client side open ticket list to osTicket 1.8